Albert Memorial, Hyde park, opposite the Albert Hall. Erected to the memory of the late Prince Consort at a cost of £120,000. The memorial was designed by Sir Gilbert Scott, and consists of a bronze gilt statue of the Prince Consort by Foley, under a Gothic canopy, and surrounded by four groups of statuary---America by John Bell, Africa by Theed, Asia by Foley, and Europe by Macdowell. There are several smaller groups of statues by Weekes, Calder, Marshall, Thorneycroft, &c. Around the basement are a large number of life-sized figures by Birnie Phillip and Armstead. NEAREST Stations, &C., (see ALBERT HALL) 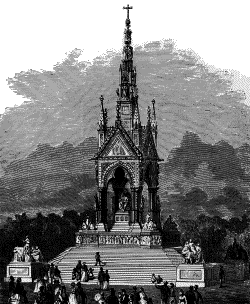 The grandest of all our London monuments to departed worth is the Memorial erected at Kensington in memory of Prince Albert. Noble in its plan and dimensions, built of varied and valuable material, and enriched with appropriate statuary, it is at once an adornment to the great city, and a national memento of a good and wise man. Most of our public monuments have - been erected to men of the sword, and commemorate the achievements in arms of our naval heroes and military chiefs. The Albert Memorial is reared to one who won fame in the ranks of peace, and whose glory it was that he used his exalted position for the highest ends, upholding good morality by his example and influence, and furthering the progress of the nation in every way. This Memorial to him is well worth a visit, and a leisurely examination of its artistic beauties.
The base of the monument is formed by three quadrangular flights of steps, ayranged like part of a wide-spreading pyramid; at the four corners are large masses of carved granite, on which stand groups of marble statuary, gigantic in proportions, and representing Europe, Asia, Africa, and America. Above the steps rises the pedestal of the Memorial, elaborately adorned with nearly 200 figures in high relief and of life size. These are full-length portraits, or statues, - of celebrated painters and sculptors, poets and other writers, men of science, &c.; and you will be much interested if you can spend a few minutes in trying to identify these worthies. At the four corners of this podium, or pedestal, we find some more groups of allegorical statuary; representing Commerce, Manufactures, Agriculture, and Engineering. Then comes the gigantic statue of Prince Albert, richly gilt, and resting on a pedestal fifteen feet high. He is sitting on a chair of state, and robed as a Knight of the Garter. Over him is a richly decorated Gothic canopy, about thirty feet square, supported by groups of polished granite columns, and surmounted by a beautiful spire, highly ornamented up to the very top, where a cross completes this marvellous piece of art workmanship. The total height of the Memorial is 176 feet.
source: Uncle Jonathan, Walks in and Around London, 1895 (3 ed.)

To Sir Gilbert Scott is due the credit of designing the Memorial to the late Prince Consort, which took twenty years to complete, and cost £120,000. It stands in Kensington Gardens, opposite the Royal Albert Hall, is 175 feet high, and is resplendent in every detail-a mass of gilt, mosaic, and coloured stones. The colossal bronze-gilt figure of Prince Albert himself, under the Gothic canopy, is by Folev. On the projecting pedestals of the clustered granite columns are marble groups, representative of Agriculture, Manufacture, Commerce, and Engineering. In marble relief on the basement are no fewer than 169 figures of poets, painters, sculptors, and architects, while the groups at the corners of the steps do duty for the four continents.

source: The Queen's London : a Pictorial and Descriptive Record of the Streets, Buildings, Parks and Scenery of the Great Metropolis, 1896