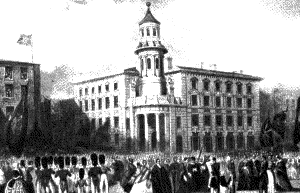 The Coal Exchange, in Thames Street, is, legally, an open market; but the great dealers having obtained a complete monopoly, the consumers are prevented from buying. 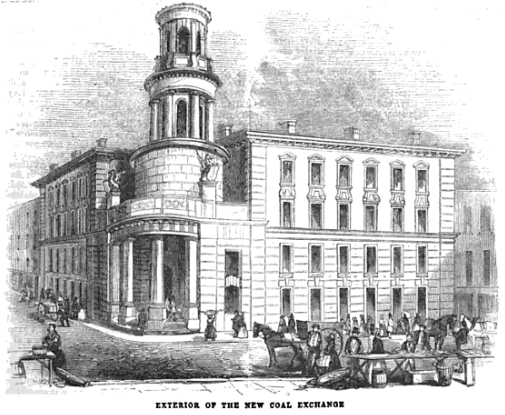 COAL EXCHANGE, in LOWER THAMES STREET, nearly opposite Billingsgate, established pursuant to 47 Geo. III, cap.68. The first stone of the present building was laid Dec. 14th, 1847, and building opened by Prince Albert, in person, Oct. 30th, 1849. In making the foundations a Roman hypocaust was laid open, perhaps the most interesting of the many Roman remains discovered in London. It has been arched over, and is still visible. The interior decorations of the Exchange are by F. Sang, and are both appropriate and instructive, representing the various species of ferns, palms and other plants found fossilised amid strata of the coal foundation; the principal collieries and mouths of the shafts; portraits of men who have rendered service to the trade; colliers' tackle, implements &c. The floor is laid in the form of the mariner's compass, and consists of upwards of 40,000 pieces of wood. The black oak portions were taken from the bed of the Tyne, and the mulberry wood introduced as the blade of the dagger in the City shield was taken from a tree said to have been planted by Peter the Great when working in this country as a shipwright. 20,000 seamen are, it is said, employed in the carrying department alone of the London Coal Trade.

Coal Exchange. The present Coal Exchange, situated at the corner of St. Mary-at-Hill and Thames-street, facing the Custom House, was opened in 1849 by the Prince Consort, accompanied by the Prince of Wales and the Princess Royal, in the mayoralty of Alderman Duke, who was made a baronet in honour of the occasion. The building was designed by Mr. J. B. Bunning, F.S.A., the late City architect. It is in shape a rotunda, 6o ft. in diameter; it has three galleries, and is crowned by a dome 74ft. high, which rests on eight piers. The walls of the interior are decorated with views of the Wallsend, Percy, and other celebrated collieries, some of the principal ports from whence coal is shipped, and inside the dome are paintings of specimens of the flowers and fossil plants found in the coal measures. On the ga1leries are a few cases containing specimens of coral and fossil plants found in different parts of the world. The floor is made with 4,000 pieces of inlaid wood, and represents the face of a mariner compass. In the centre are the City shield, anchor, &c. ; the dagger blade in the arms being piece of a mulberry tree planted by Peter the Great when he worked as a shipwright in Deptford-dockyard. In excavating for the foundation of the present building, the remains of an old Roman bath were brought to light, which have now been enclosed, and can be seen upon application to one of the beadles. The offices in the building are occupied by coal factors, and others connected with the trade ; the three trade societies and the corporation officers, who enter all ships bringing coal into the port of London, and collect the City dues on all coal brought with in certain limits, The money collected is afterwards employed for metropolitan improvements. The Exchange is the property of the corporation, and a market is held there three days a week, on Mondays, Wednesdays, and Fridays and, being an open market, established by Act of Parliament, any person can obtain admission NEAREST Railway Station, Cannon-street; Omnibus Routes, King William-street, Fenchurch-street, and London-bridge; Cab Rank Fish-street-hill.