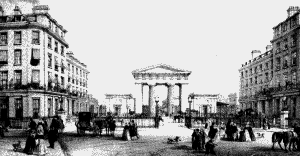 Euston Station, in Euston Square, is the terminus of the London and North Western Railway, and its name is derived from the secondary title of the Dukes of Grafton, ground landlords of this district. The fine portico seen in our view was designed by Hardwick, and is said to have cost £30,000 some of its stones weigh no less than thirteen tons. The buildings beyond the arch are the waiting rooms and booking offices of the station, the arrival and departure platforms being to the right. it is hard to realise in these days of speedy travelling that half-a-century ago the trains were hauled to Euston from Chalk Farm by ropes, the locomotives not being brought nearer town lest they should frighten the horses