THE WHEEL AT EARL'S COURT. - This gigantic wheel, which forms such a prominent object in the landscape anywhere west of London, is extensively patronised by the public during the Exhibitions at Earl's Court, and it matters very little if it is an Indian, or Colonial, or South African Exhibition, the big wheel always has its crowd of patrons who like to experience the exhilarating effects of an ascent into the air, minus the dangers attending a balloon and the probability of making an ascent rather higher than they originally intended, and the improbability of landing on the earth again in a perfect condition. This slowly revolving wheel takes you up to a good height, from which you have a splendid view of bricks and mortar below you; and there is just that touch of danger which always gives piquancy to pleasure, that perhaps it may stop, and refuse to go on, and its patrons may have to be fed on buns and soda water by venturesome sailors until the machinery once more gets into working order, and you slowly descend to your despairing relatives sand expectant friends with tumultuous applause. and you feel proudly conscious of something attempted and (thank goodness) something done. 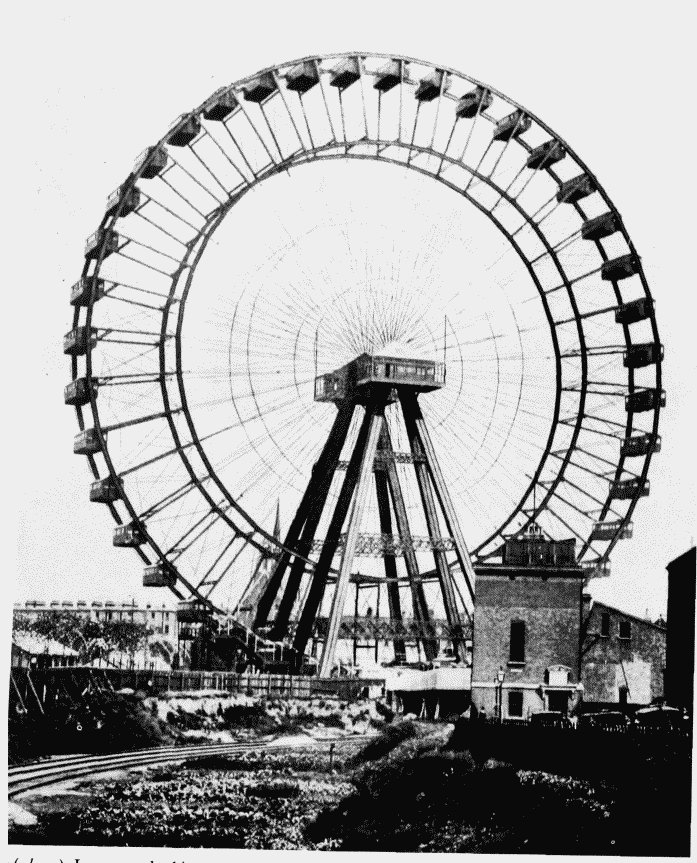 THE GREAT WHEEL AT EARL'S COURT.

The Great Wheel at Earls Court is an enlarged copy of the one at the Chicago Exhibition. It is three hundred feet high, and is made entirely of steel, on the tension principle. It is furnished with forty cars, holding altogether sixteen hundred people, and the journey round occupies twenty minutes. The motive power is supplied by two 50-horse power electric motors.