New Royal Exchange. - This stately and convenient fabric, erected from designs by Mr. Tite, stands partly on the site of the former building, and partly on an extension, obtained by pulling down Bank Buildings on the West, and Sweeting's Alley and other courts upon the East; to effect which Parliament granted the sum of 190,00l. to be raised on the coal duty, but eventually the purchases of property exceeded this amount by 27,000l., which was defrayed by the City of London, out of its private funds. The building will cost 150,000l in addition, which sum (less 50,000l., obtained from the insurance offices,) is provided in equal proportions by the City of London, and the Mercers' Company, who are entitled, as trustees of Sir Thomas Gresham, to the rents derived from the shops and offices.
The principal front of the building faces the West, where there is a portico of eight Corinthian columns, of two rows in depth, increased in the centre by a deeply recessed entrance portal. The tympanum is decorated with sculpture by R A. Westmacott, jun., Esq., A. R. A. This, which is an allegorical tableau, may be thus described the central or principal figure is a colossal impersonation of Commerce, 10 feet in heigh    t, wearing a mural crown, and is accompanied by accessories allusive to wealth and enterprise, as a cornucopia, bee-hive, &c.;  in her left hand she holds the charter of the Royal Exchange, while her right is connected with part of a ship; the supporting pedestal consisting of two dolphins separated by a shell. Immediately on the right of the figure of Commerce is a group of three British merchants, habited in civic robes as Lord Mayor, Alderman, and Common Councilman. Next to them are two Asiatics, natives of our East Indian possessions, the one a Hindoo, the other a Mahomedan, each being readily distinguished in person as well as costume. Next is a Greek carrying a jar, who appears connected with the others by seeming to move towards their,, while he is apparently conversing with the other figures, to whom his attention is evidently turned. The last remaining figures on this side are an Armenian and a Turk; the former, the banker and scholar of the East, is occupied with a scroll; and the latter, the Osmanli merchant, may he supposed to he occupied with his daily accounts; he closes the series of figures on the right; the extreme angle of the tympanum being filled with an anchor and other nautical emblems. The first group of figures on the left of Commerce shows two British merchants, robed similarly to those on the right, and to whom a Persian is showing some woven fabric. To him succeeds a group of a Chinese, a sailor of the Levant, and a Negro, succeeded by a British sailor cording a bale of cotton. The remaining figure is a supercargo, - factory agent or some other functionary; the extreme angle of the tympanum being filled with jars and other packages. The East end of the building is ornamented with a clock tower that contains a set of Chimes consisting of seventeen bells, the largest or tenor bell weighing a ton. The merchants' area is larger than that of the old Exchange, the central part being like that also open to the sky. The dimensions of this area are 170 feet by 112, and of the open part 116 feet by 58; it is approached by the entrance already described at its Western extremity, and corresponding ones on the East, North, and South sides. The ambulatory is separated from the open portion by arches and columns, the interior being arranged after the best examples of such open and uncovered courts in thin palaces and buildings of Italy. Lloyd's Coffee-house occupies a large portion of the first floor at the East end. The principal room is a magnificent apartment, 90 feet long by 40 feet wide, in addition to which there is the subscribers' room, almost as large. Thin Royal Exchange fire-office occupies nearly all the floors in the Western part of thin building, and shops formed in thin arches between the columns encompass it on the North, South, and East sides.

ROYAL EXCHANGE (THE). A quadrangle and colonnade, (the third building of the kind on the same site), erected for the convenience of merchants and bankers; built from the designs of William Tite, and opened by her Majesty in person, Oct. 28th, 1844. The pediment was made by R. Westmacott, R.A., (the younger); the marble statue of her Majesty in the quadrangle, by Lough; and the statues of Sir Thomas Gresham, Sir Hugh Myddelton, and Queen Elizabeth, by Messrs. Joseph, Carew, and Watson. It is said to have cost 180,0001. The two great days on Change are Tuesday and Friday, and the busy period from halfpast 3 to half-past 4 p.m. The Rothschilds, the greatest people on Change, occupy a pillar on the south side of the Exchange.

Royal Exchange (The) was opened by Queen Victoria on January 1st, 1845. It was built after the designs of Sir W. Tite, and cost no less than £150,000. The old exchange, which occupied the present site, was built after the Great Fire, and again suffered from the same element in 1838. The first Exchange was opened by Queen Elizabeth in 1570, who, by her herald, declared the house to be "The Royal Exchange." Sir Thomas Gresham introduced exchanges into England, but they had been popular in most of the commercial cities of Italy, Germany, and the Netherlands, many years previous to their adoption here. The present edifice is almost an oblong, and encloses a courtyard open to the sky, round which is an ambulatory 170 ft. long by 113 ft. In the centre of the open space is a marble statue of Her Majesty, and about this image of the Queen merchants and traders meet at certain hours to transact business and discuss matters affecting finance and commerce. The ceiling of the ambulatory is worth looking at. It is divided by beams and panelling, and lavishly decorated. In the four angles are the arms of Edward the Confessor, Edward III., Queen Elizabeth, and Charles II. Busts and armorial bearings of eminent persons abound including those of Whittington and Gresham. The west front, which is the principal entrance, is by far the most impressive. It consists of a Corinthian portico, with columns upwards of 40 ft high. On the frieze is an inscription in Latin, explaining that the Exchange was founded in the thirteenth year of Queen Elizabeth, and restored in the seventh of Queen Victoria. The apartments above the ambulatory are occupied, for the most part, by large insurance companies, and by "Lloyds" rooms. (See LLOYD'S.) NEAREST Railway Station, Mansion House (Dist) Moorgate-st (Metrop.), and Cannon-st (S.E.); Omnibus Route, Bank; Cab Rank, Bartholomew-lane. 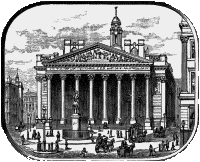 We will pass on, as well as we can, to the ROYAL EXCHANGE. There it is, facing us, its fine portico showing up well by reason of the ample space in front of it. On the pediment above the eight pillars is a group of sculpture, consisting of eleven allegorical figures. In the centre of the group we find Commerce leaning against the prow of a ship, with a cornucopia and a beehive at her side-emblems of plenty and industry; while, on her right and left, English merchants are talking and bargaining with foreign traders. Underneath runs the beautiful motto which the Prince Consort chose from the Bible: The earth is the Lord's, and the fulness thereof.'
Let us run up the broad flight of steps, and, turning our backs for a minute on the Royal Exchange, let us gaze on the remarkable scene in front. A wide stretch of pavement lies before us, and near the edge of this is a statue of the Duke of Wellington, cast from the metal of guns taken from the French in those old fighting days when the Duke was in his prime; while around its base several poor women are sitting, engaged in the peaceful occupation of arranging flowers into little bunches for gentlemen's buttonholes. And beyond this is the great panorama of human heads, and busses, and cabs, and vehicles of all sorts, moving-always moving, like a swarm of busy bees in a glass hive, or hike a stream of active ants, intent on their small but very particular business. It is a living picture which, once seen, will not soon be forgotten. The spectator becomes fascinated in tracking the hardy voyager as he travels from shore to shore of this perilous ocean; but, while he listens to the noise and buzz, the words of Sir Richard Steele, hearkening from an elevated position to a similar hubbub more than a century and a half ago, may occur to his mind : What nonsense is all the hurry of this world to those who are above it!'
When we step into the Exchange, passing through the portico and vestibule, we find a large open court, with a marble statue of the Queen, by Lough, in the centre. This court is surrounded by an ambulatory, or walk, formed by arcades; but the centre, round the statue, is the chief spot on which the merchants throng at the time of ' high change,' that is, between three and four o'clock. Now is the time and here is the place to conclude a bargain which shall bring a few thousand pounds into your pocket, or, on the other hand, take just as much out of your pocket, supposing it to be there already.
The first stone of the Royal Exchange was laid by Prince Albert on January 17th, 1842; and the building was opened by the Queen in state on October 28th, 1844. Let us hope that it may not share the fate of its predecessors, both of which were destroyed by fire.
source: Uncle Jonathan, Walks in and Around London, 1895 (3 ed.)

Few edifices in London are more imposing than the Royal Exchange, with its stately Corinthian portico. It was built by Tite in 1842-4, on the site of Gresham's Exchange. In the tympanum is a group representing the Sovereignty of Commerce, while below are inscribed the words The earth is the Lord's, and the fulness thereof. Business is transacted in the building of an afternoon, the attendance being greatest on Tuesdays and Fridays. On the left of the Royal Exchange is the Bank of England, at one end of Threadneedle Street. The equestrian statue in front represents Wellington, and is an excellent specimen of Chantrey's work. The open space bounded by the Exchange, the Bank, and the Mansion house is perhaps the busiest in all the City.