London is big. You just won't believe how vastly, hugely, mind-bogglingly big it is. I mean, you may think it's a long way down the road to the chemist's ...

To slightly misquote Douglas Adams, London is big. It can also seem weirdly unnavigable, with some districts constructed solely for the purpose of delaying the unwary traveller. Anyone who's attempted to drive to Croydon on a Saturday afternoon will tell you this.

How, then, to get around?

The underground, of course, does a marvellous job of straightening things out, annihilating time and space, but is widely acknowledged to be a snare and a delusion, reducing the magnificent mess of the great metropolis to an orderly circuit-board. Essentially, it's a very primitive teleportation system, without any fuzzy sparkling lights, or a doomed redshirt member of the security team. The tube, in short, just plonks you down here or there, with a gratuitous whiff of body odour and buskers.

Where's the fun in that?

I will concede that buses are marginally better; but there is still the small matter of other people.

I wish I liked other people. Honestly. But how is that even possible?

A brief list of people who annoy me on buses:

Indeed, anyone who tells you they love London - truly love London - but does not walk its streets like a demented vagrant ... well, I contend that person is a liar.* [*acceptable exceptions: disability; age-related infirmity; a morbid fear of paving.]

Yesterday, therefore, I decided to take a big walk.

I do this frequently, but rarely with much forethought.

This weekend, however, the family was away. I had all day to myself.

So I thought I would walk to all London's 'magnificent seven' cemeteries - the grand, doom-laden commercial cemeteries laid out in the late 1830s and early 1840s - Abney Park, Tower Hamlets, Nunhead, West Norwood, Brompton, Kensal Green and Highgate. I planned a route. I primed my mobile device. Phasers on stun.

It turns out this is quite a BIG walk. I managed about nineteen miles of it.  Here's how I got on ... 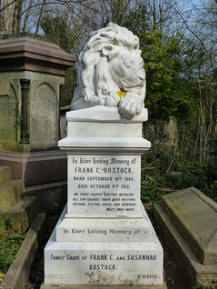 I began with Abney Park, the penultimate of the seven cemeteries in construction (opened in 1840). I felt its psycheogeographic complexity suited my endeavour. The lost Hackney Brook, now a buried sewer, once ran along its northern boundary -  bodies, water, excrement, merging in an unholy, unconsecrated stream of consciousness - for this was, too, a dissenters' ground - resonating with the intense seriousness of my enterprise.

Mainly, though, it's quite near to my house.

I can recommend Abney Park for many reasons, not least the derelict gothic chapel at its heart, which has featured in many a music video, and the curious Egyptian gateposts and lodges on Stoke Newington High Street. A clash of styles of monuments can be found in all the seven cemeteries - Egyptian, gothic, classical (and others I am intellectually unequipped to delineate). The customer was always right, frequently lacking in taste. I strongly suspect, however, the artist for Pugin's An Apology for the Revival of Christian Architecture had Abney Park in mind, when he came up with this mocking 'Entrance Gateway for a New Cemetery':

From Abney Park, I headed south-south-east, full of the joys of death. I wandered past Manse Road, whose greatest achievement is to retain its mid-Victorian street sign (can you spot the difference? It is N). Thence I positively wended my way through Hackney, until I reached Mile End.

You might know Mile End for its council blocks, climbing wall, or Queen Mary University. But, merging into Bow, it's also a rather historic Victorian suburb.  There are houses with window-guards and such like.

The ironwork provided a certain degree of friendly reassurance, as I headed towards the district's greatest Victorian treasure - Tower Hamlets Cemetery. 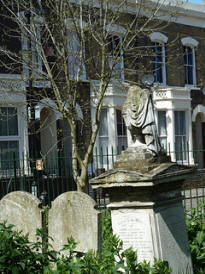 Tower Hamlets was the last of the  seven cemeteries (1841) and never quite acquired the sophistication of its contemporaries, partly because it had so many rivals; partly because it was in the East End. The ground was  originally in a semi-rural setting, beyond the bounds of the metropolis. But London grew, and Tower Hamlets Cemetery was surrounded by housing, leaving it cramped and confined (the other cemeteries suffered similarly from suburban creep). It would become, largely, a cemetery for working people, rather than the affluent middle-classes for whom it was intended.

I found the grass long, many of the monuments hidden. This stood out - one of the nicest tombstones carvings I've seen, dedicated to William Willson, who departed this life, April 9th, 1867, with this grim verse:

Alas! the land wind failed;
And ice cold grew the night.
And never more on sea or shore,
Should William see the light. 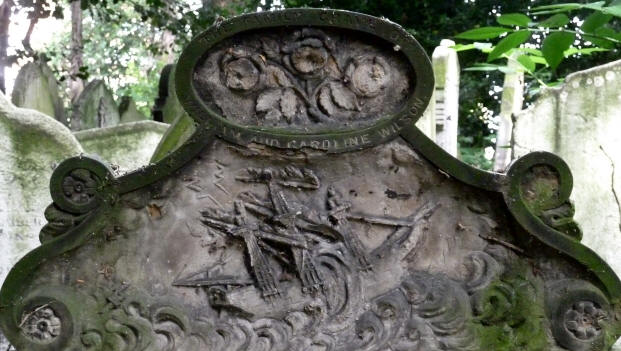 Stage one of my ridiculously ambitious journey was complete.

The one delight between Tower Hamlets and the Isle of Dogs was a peculiar derelict church in Northumbria Street, more scaffolding than brick. It was surrounded on all sides by a close of Barratt Homes, like the enemy clustering around a fallen warrior. 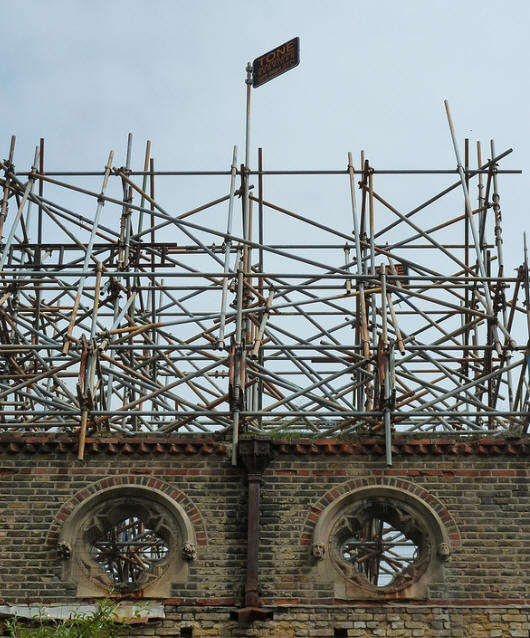 I then headed south, discovered Zen of Blake's Seven fame, transmuted into pavement; and a dead paint jewelled bollard.  I penetrated the Isle of Dogs via the Poplar Time Tunnel. I recommend it; but take protection. 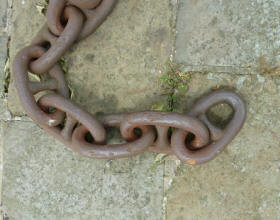 What can one say about the Isle of Dogs that has not been said? Money, bankers, regeneration, Canary Wharf, argumentative water ballet - we've heard it all before. I headed for the river, found the launch site of the Great Eastern and thought myself another Brunel, but for the phallic cigar, success and fame. Bowel-like great chains lay scattered here and there, anchors, seaman's missions, more chains, and the ghosts of river-pirates - it could be no other - whose distant sepulchral tones wailed eerily in the distance ('And, on the left, you see the Isle of Dogs, so-called because ...'). I headed hastily for the Greenwich Foot Tunnel, with its patent non-slipping steps to face my darkest fear ... THE DEEP SOUTH. 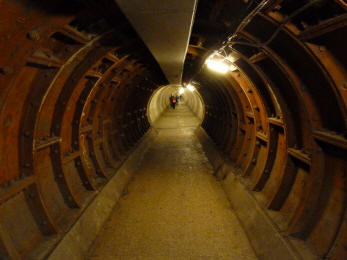 Cute little Greenwich. The deceptive face of South London, with its pretty cottages, mid-Victorian villas, and maritime street nomenclature. All this, just to soften you up for New Cross.

And yet - and yet - every part of the great metropolis has one redeeming feature. And I found in New Cross a reminder of the future that has already happened. The internet - the world wide web - the information superhighway (thank god that died) - will turn to dust and this will be its tomb: 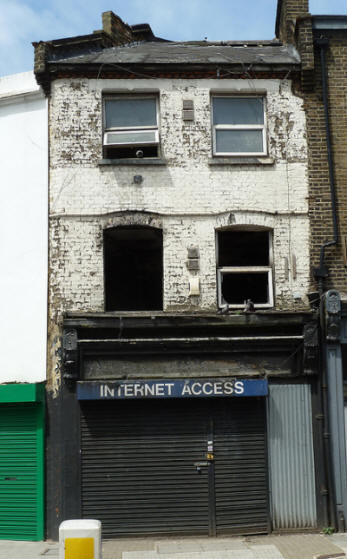 From this grim reminder of our inevitable collapse, it was a short walk to another stage of decay, Nunhead Cemetery.

Nothing says Victorian cemetery like an immense gothic chapel. 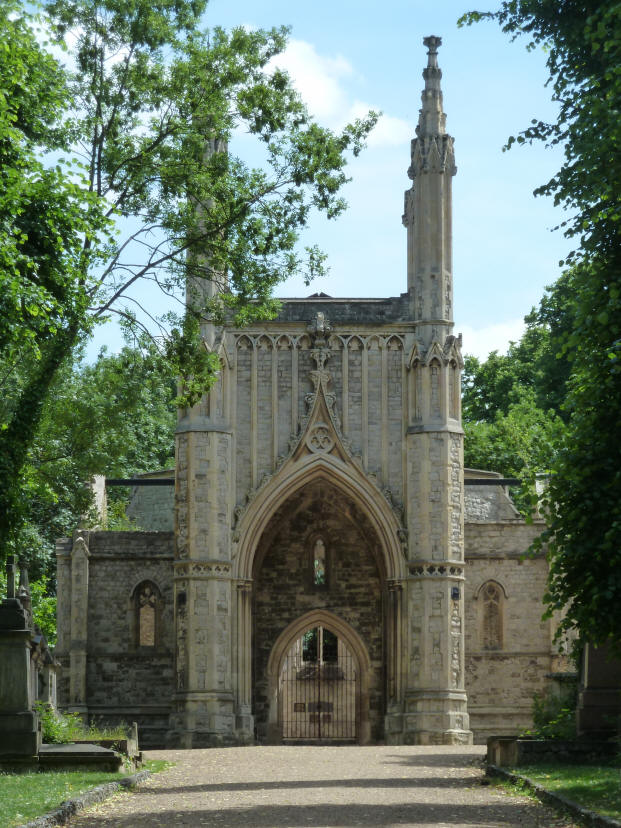 Nunhead was the south London sister of Highgate cemetery, run by the same London Cemetery Company, opened in 1840. The chapel is exquisite, although lacking a roof.

It was here, sitting on a bench, that I tweeted

There is nothing like walking the streets of London, passing through countless metropolitan dreams.

I had been walking for four hours or more, passing through this district and that, and London increasingly seemed like a beautiful never-ending maze, bricks and houses, people and places, merging into one fantastical dream.

Then I remembered I had to go to West Norwood.

Sir Alan, I blame the failure of this task on Dulwich.

To reach West Norwood, I had to walk along Dulwich Common. It was there I despaired. The endless traffic jam of wealth: like LA, everyone drives in Dulwich. Detached little mansion houses, nestling behind hedges and security fencing. The crickets pitches. The faux farm shop at the riding school.

Yea, though I walk through the valley of the shadow of Dulwich.

Dulwich is, of course, thoroughly Victorian in conception. Rus in urbe in excelsis. But, in practice, I cannot think of anywhere less interesting in our great city. Bland, complacent and smug and most intolerably rustic.

The sight of Dulwich College Sports-Day / School-Fair / Open-House / Oppressing-the-Masses-Workshop, well-mannered imperial pomp and bouncy castles, did nothing to raise my mood.

My heart sank, and did not rise, even when I espied a lovely stink-pipe not far short of my goal. But at least I had reached West Norwood. 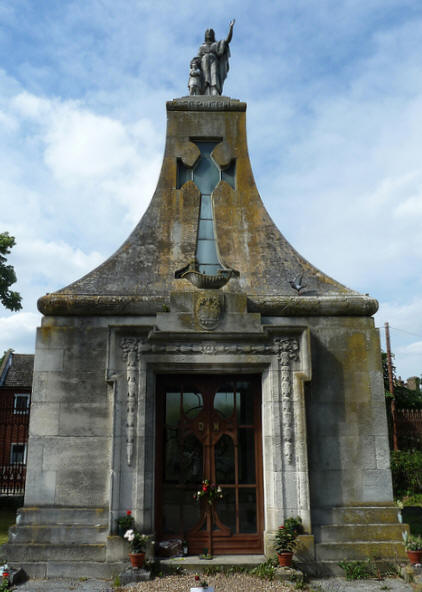 By now I was tired and listless, but this caught my eye. On the face of it, a typical gothic memorial: 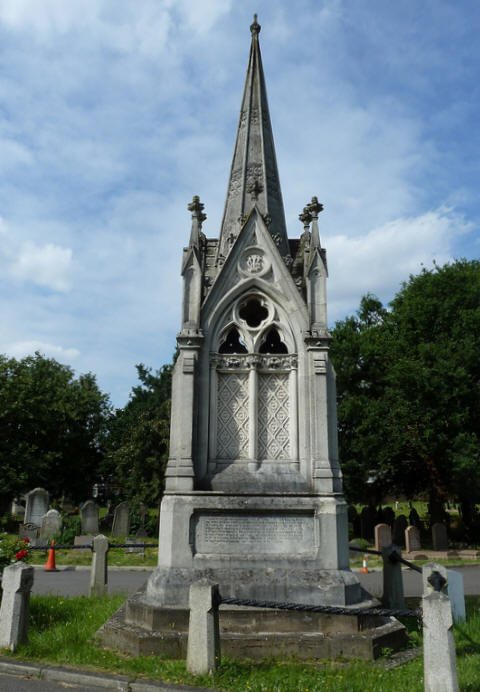 Yet it contained possibly the most grandiloquent epitath I had ever seen, belonging to James William Gilbart, Banker

My legs were exhausted, my spirits weak, but at least, I pondered, I would never become as much of an arse as James William Gilbart.

The end was nigh. I saw little between West Norwood and Clapham of any interest. Some Victorian stucco moustachios; an art deco estate; a Battersea Cinderella's castle. I gave my water-bottle a name. I called him Alfred. But he could not last.

On the Latchmere Road, Battersea, I conceded defeat. I had been walking all day; the death march had defeated me.

What had I learnt?

London. It is quite big.

The Internet is in the past.

That nothing lasts forever, except that bloody road along Dulwich Common.