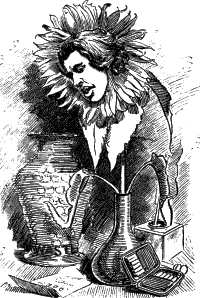 "O.W."
"O, I feel just as happy as a bright Sunflower!'
Lays of Christy Minstrelsy
AEsthete of AEsthetes!
What's in a name?
The poet is WILDE,
But his poetry's tame.

Another sad and erratic genius I knew was Oscar Wilde; when he was at Oxford he wrote to me about a sonnet I had had in the World, and when I met him in a London drawing-room he came up and talked to me in his then most affected style; but I soon showed him I did not care for either symphonies or neurotics, and when I mentioned casually he was casting pearls before swine and wasting jewels many others would be glad of, he gave a good-humoured laugh and talked delightfully until retrieved by his mother, who was most eccentric to look at, at any rate, and who on that occasion wore no less than three skirts one above the other, telling us she was afraid if she left them at home her landlady would wear them. She showed them to her hostess one by one, so I am quite certain I am correct in my statement. I always think the mother and sons should have been separated, and each given appropriate medical treatment. I am sure Oscar Wilde was a brilliant genius, as sure as I am that he was mad, and that the absurd adulation he received from man and woman alike turned his head. He was evil even in the Oxford days, but with the evil of insanity, and I wish the days would come when such brilliant and unbalanced men could be taken early and so treated by scientific men that their brains could be used for good instead of for doing awful harm.
Many a gallant lad owes his damnation to Oscar Wilde; as for me I never liked him; he was sensual looking and always appeared to me to exhale an unhappy and disgusting atmosphere, and I was not surprised at his fall or at his dreadful fate. The first time I saw him he was fawned on and feted by all; the last time I saw him was in France; he was standing in a little wood by a bicycle, and as 1 came by his hand went up to his hat. I did not appear to know him, but I shall never forget his face; it was that of a lost soul gazing through the gates of paradise. He had always met me when he was the guest; now there lay between that time and then the long sufferings and disgrace he had sold his brilliant birthright for, and he was hankering, I am sure, for the return of what would never come back. There have been many attempts made since his death to whitewash his memory; I think his friends would be wiser to let him rest in peace. He was a genius; he was a bad and disgusting man; and nothing any one can write of him can alter either fact.